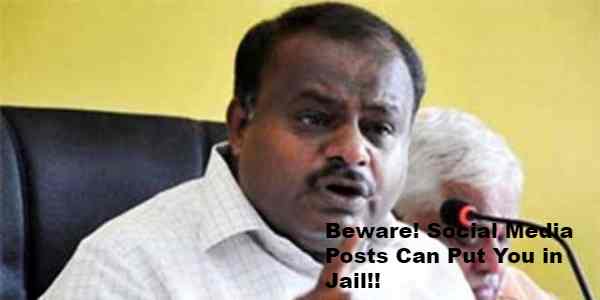 A 24 year old man has been arrested in Managaluru for posting abusive comments against Karnataka’s present Chief Minister HD Kumarswamy. The man named Prashant Poojary had posted a post on Instagram which has put him into trouble. The Central Crime Branch (CCB) has arrested the man because it is said that the post contained abusive comments against Karnataka CM. The message was posted in Tulu language.

The man has been charged under the section 153 (A) of IPC which is related to promoting a feeling of animosity between various communities and groups. Prashant Poojary is an admin of the page Kudla Trolls and it was being noticed that posts on these pages were totally abusive against HD Kumarswamy. Police also told that these posts can lead to riots and can cause public disharmony. The trolling against HD Kumarswamy had increased after the release of State budget. In the year 2016 also a young man was arrested for posting a funny image of a CM.

Also Read: Cricketers and Actors who have been Invited to Pakistan’s To Be PM’s Oath Ceremony

So, this was all for today. After reading this news story we hope that you will think twice before blindly posting things on Facebook, Instagram or any other social media platform.