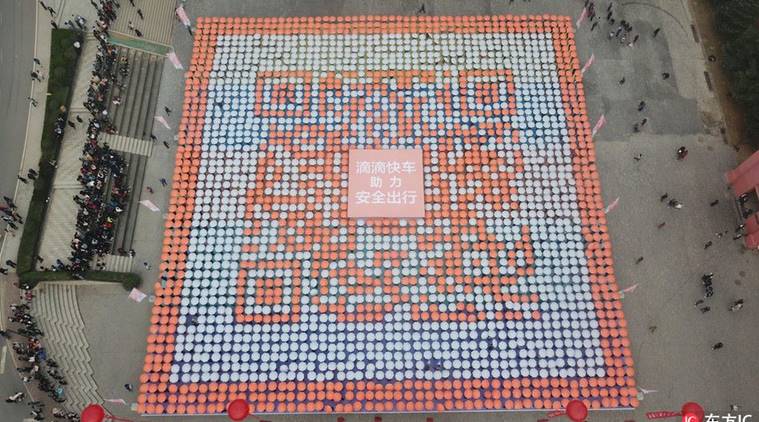 China has been known for breaking so many world records and it has yet created another one. With over 2500 students, China has formed the Record-breaking human QR code.

For the record-breaking attempt to form a 51-meter-long and 51-meter-wide figure, students had taken help from the umbrellas — which was one white and other one was a peach to form this variation and the coded pattern. The attempt was also filmed in Zhengzhou, Central China’s Henan province.

We all know about QR codes and how to use it from time to time to do a few online transactions or like to use a feature of any of the gadget. But when it finally comes to QR codes in China, it is actually a lot more than expected. In China actually, not only can you really shop with these barcodes you can also rent these cars or bikes and even so give money to beggars using these codes simply!  Fascinating isn’t it.

Also Read: How an Indian Created a World Record just with the help of Candles

Yes, so it shouldn’t be really quite surprising if they have made it to the world record because of these scannable barcodes that were this common actually. But here’s a catch too, that it was not on done some paper or on a computer, but it was, in fact, a giant one formed by humans itself!

On November 1, more than 2500 students gathered and formed a big square to simply form the bicolor structure. Also, for the record-breaking attempt to just form a 51-meter-long and 51-meter-wide figure, the students then took help from umbrellas — one white and another peach to form this variation and the coded pattern. The attempt was then filmed in Zhengzhou, Central China’s Henan province by the other students from Sias International College and the collaboration by Didi Express.

Officials from the World Record Certification Agency were at the work during the record-breaking attempt to create this world’s largest QR Code simply made by humans to hand out the certificate to the students.

Earlier in September, a giant QR code was also created by with over 1 lakh trees in a bid to attract more of the tourists in a vast field outside of the Xinlinshui village, which is located near it.

This was Manavta Kaundinya here to talk about the Record-breaking human QR code which has been created with the help of 25000 Chines students. Don’t forget to share the article with your friends.